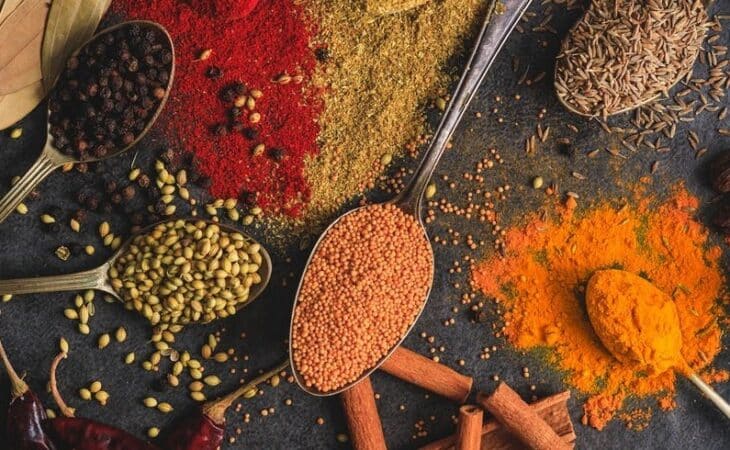 India’s gastronomical heritage has laid strong emphasis on the ideals of holistic wellbeing and conscious consumption. Ancient Indian texts and works of Ayurveda have elucidated on the bearing dietary practices have on an individual’s physical and emotional wellness. These ideals of sustainability and wellness are also gaining global currency and influencing a shift towards a healthier lifestyle. As this shift happens, the west is increasingly turning towards the east to identify superfoods. This has resulted in the global recognition of foods such as matcha, a tea native to China and later popularized by Japan; ginger hailing from Southeast Asia; and foxnuts and flaxseeds that have originated in India. However, in the case of India, trade in agricultural produce and food is not a recent phenomenon.

Amongst the most prominent and, perhaps the oldest examples of the journey of Indian food is the trade of black pepper. Referred to as black gold, one shipload of black pepper from India would be exchanged for Roman goods worth double or even triple the value of this spice. An account narrates that when Vasco da Gama arrived in Calicut, in the present-day state of Kerala, and proposed trade between India and Portugal, the Samudrin agreed to exchange black pepper for gold and silver. This sparked off an economic link that eventually led to European colonization. Even today, black pepper remains a major and sometimes, the only spice flavouring many culinary preparations in the West. Apart from its rich aroma and taste, pepper is also believed to be a strong anti-oxidant and a cure for respiratory and nervous ailments. Though India once enjoyed the monopoly over the trade of black pepper, today it is only the third-largest exporter in the world after Indonesia and Vietnam.

Another Indian spice, that Ayurvedic texts describe in length, and has gained global traction is turmeric. Like pepper, turmeric or haldi is known to have immense benefits – from healing respiratory ailments to curing skin problems. Used in various forms, turmeric is one of the most common spices used in households across India. A few years back, the simple recipe of haldi doodh shot to global fame after it started being served as turmeric latte in cafes across the world. Subsequently, Google food trends cited turmeric as the “breakout star” in 2016. Furthermore, since the outbreak of the n-Coronavirus, global awareness about turmeric has increased multifolds. Even world leaders such as the Indonesian President Joko Widodo has included a local version of turmeric drink in his everyday diet, in order to enhance his immunity.

Apart from turmeric, other recent examples of India’s culinary wisdom that has been incorporated in dietary practices across the world include the consumption of ghee and moringa. Ayurveda mentions the benefits of ghee and renders it as an essential constituent of any meal. Consuming even a small portion of ghee can provide complete nourishment to the body and soothe inflammation. Alluding to the importance of ghee, the New York Times had remarked that this Indian butter “deserves to be in more American kitchens”. Another crop indigenous to the state of Tamil Nadu, making inroads to American markets is Moringa. More commonly known as Drumsticks, each component of this plant–roots, shoots, fruits and flowers–can be utilized. Apart from its nutritional and beauty-enhancing properties, drumsticks pod can also be used in the process of water purification.

In times when ideas of conscious capitalism and sustainability are determining production and consumption patterns. The demand for foods which are healthy as well as environmentally friendly has increased, as illustrated in the case of some millets that consume less water and labour resources. Besides entering the kitchens in the most organic manner possible, superfoods have also spurred innovation in the food industry. While brands like Soulfull are popularizing the consumption of Ragi in India, brands such as Kuli Kuli – a pioneer in Moringa-based products and OMGhee – selling varieties of ghee are catering to the global demands for Indian-origin superfoods.

The increasing popularity of Indian superfoods also creates immense market opportunities to promote food enterprises and also harness their potential as a source of gastro-diplomacy. A form of cultural diplomacy, gastro-diplomacy seeks to advance a country’s culinary heritage at the global level. India’s culinary heritage not just includes its diverse cuisine but also carries along with it the centuries-old wisdom of a healthy and fulfilling life. The Indian diaspora can also be instrumental in furthering India’s gastro-diplomacy by presenting unique Indian flavours as well as infusing them with the food culture of their host countries. Tapping into the rising demand for Indian superfoods and complementing it with promoting our civilizational food wisdom can strengthen India’s soft power and enable its rise as a global leader of gastro-diplomacy.

This story originally published in SoftPowerMag