Mahashay Dharampal Gulati, ‘MDH Uncle’ as he was known, passed away on 3rd Dec 2020. A generation knows him only as the face of his brand, his appearance in all his commercials, memes and anecdotes. In Popular culture he was a caricature of sorts; a poster ‘boy’ of immortality along with Queen Elizabeth and Mick Jagger. But Mahashay Dharampal ji traversed a remarkable life journey that would outshine and inspire any millennial or Gen Z achiever of today.

Here are a Few Milestones From His ‘Lit’ Road Trip

Long before ‘side hustling’ became a buzzword, MDH Uncleji dabbled in several gigs. From selling mirrors, manufacturing soaps, to doing odd jobs like carpentry, selling clothes, running a hardware business, rice trading to even riding a ‘tonga’ (horse-cart) before he finally joined his father’s business.

Long before today’s celebrated start-up culture, MDH Uncleji plunged into a business idea he believed in. With his savings, he bought a small shop in Ajmal Khan Road, Karol Bagh for setting up his father’s business again. Scaling that up to a Rs 1000-crore spices giant, he is a start-up artist like no other.

Long before ‘innovation’ became a buzzword among marketers, Mahashay brought in the concept of ready-to-use ground spices for the housewives who would otherwise grind the spices manually at home, bringing in a massive shift in consumer attitude and behavior. 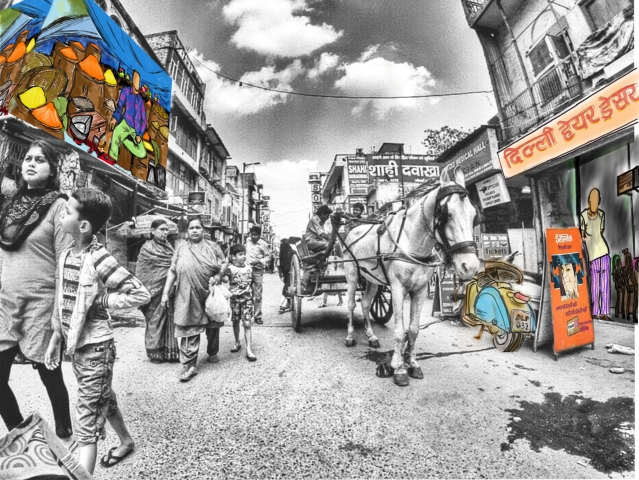 A tribute to Delhi’s old markets in which late Mahashay Dharampal Gulati of MDH traveled his life journey, from a Tongawala to a Masala brand giant. Original photo-collage and art by Hari Krishnan

Long before challenger brands positioned themselves against gigantic MNCs in media, MDH Uncleji became one of the first to launch an aggressive print ad campaign in 1948. He also decided to invest in television advertising during the early days of the medium at a time when even large brands would think twice before going on air.

Long before Indian advertisers explored culture and relationship insights, Mahashay worked on one priceless truth about the Indian tradition: Grandfatherly figures are respected and loved by seniors, adults and children. Ever wondered why there are no younger pictures of Uncleji in his brand logo?

Long before Steve Jobs became ‘the face of Apple’ and lent a human face to a technology brand, a device to communicate his vision, his beliefs to the consumer telegraphically, MDH Uncleji was smiling away as the brand mascot on the brand’s packs, building trust and credibility across users and markets.

Long before Bill Gates, Mark Zuckerberg and Priscilla Chan started philanthropy, MDH Uncleji set up twenty schools and a 200-bed hospital that treats the poor, free of cost. He used to visit the schools and hospitals regularly as well.

And lastly, long before Steve Jobs’ black turtleneck and Zuckerberg’s Zara ensemble became a style statement for business icons, MDH Uncleji’s iconic red turban, white sherwani and pearl necklace made him stand out among all!

Thanks for the masalas and the inspiration, Uncleji. You will be missed.