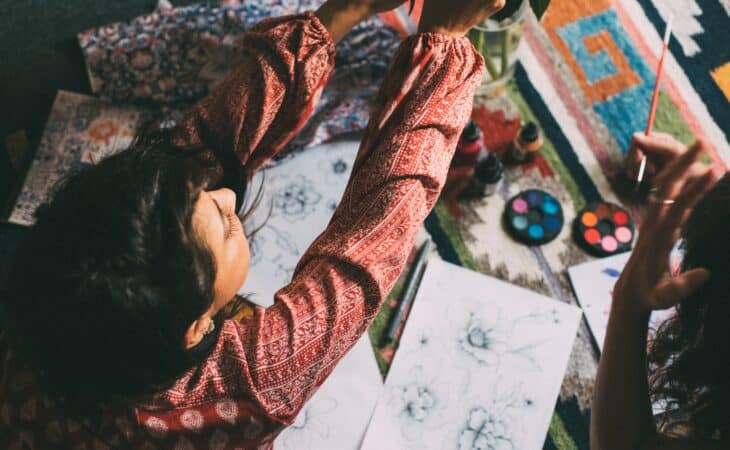 Creativity is a multifaceted process including innovation, discovery, creation and expression. It is also a confluence of sociocultural factors, individual aspirations and cosmic inspirations. Moreover, while the creative process is constantly evolving, the creative expression may invoke nostalgia or open new vistas of imagination. For instance, with nuanced forms of artificial creativity, machines have sought to recreate original works of arts, giving them a new impression altogether. On the other hand, technological interventions have also been incorporated in the process of revival and preservation of degenerated heritage and cultural know-how.

The creative process, when rooted in indigenous cultures and amalgamated with an entrepreneurial approach, also supports a country’s economic growth. Domestically, it creates avenues for the cultural enrichment of the collective community and provides livelihood sustenance to individuals working at the grassroots. Internationally, it enables cultural exports in the form of goods, services and experiences, which in-turn contribute towards strengthening a country’s brand-value globally and its soft power.

This idea is encapsulated in the concept of the creative economy – which broadly incorporates creative content such as media and audio-visual arts; creative services including fashion and tourism; and creative spaces like museums, galleries and theatres which further promulgate creative entrepreneurship. While there is no single definition of the creative economy, it is commonly underpinned by the ideas of fostering indigenous knowledge, steering innovation and leveraging the economic potential of culture.

Countries like Japan have created policy frameworks to strengthen the global footprint of their creative economy. Japanese cultural exports are reflective of Japanese entrepreneurial values, cultural traditions and cutting-edge technological innovations as illustrated through the popularity of Karate, Sushi, Anime and brands like Sony Entertainment.

In India, cultural and creative industries have thrived since millennia. India has quintessentially been a land of knowledge creators, seekers and preservers. Elaborate texts on various subjects including aesthetics, economy, arts and culture have been written over the centuries. For example, Natyashastra, an encyclopaedic work on performing arts has been referred to as the fifth Veda and holds immense relevance for various artistic disciplines even today. India’s creative economy had also been at the forefront of determining trade networks, as in the case of the spice route, and also developing diplomatic relations with other nations. In Southeast Asia, trade of spices, textiles and other commodities were accompanied by cultural exchanges advanced through merchants and craftsmen who travelled from India. The most prominent and continuing form of this cultural synthesis was the adaptation of  Ramayana, Mahabharata and Buddhist traditions into local cultures and artforms of Southeast Asian countries.

Even as the ambit of creativity has expanded over the years, India’s traditional cultural industries are imbued with timeless wisdom and larger meaning behind every form of expression. India’s heritage and indigenous knowledge are a symbiosis of science, innovation and traditions, offering solutions for a healthier, fulfilling and sustainable lifestyle. The global shift to consciousness consumption and organic living, as witnessed in contemporary times, is reflected in the increasing popularity of Indic practices of Ayurveda, Yoga and dietary traditions. India is also a hub of various forms of entertainment, art, leisure and recreational experiences. Classical music and dance forms, most of which have a strong grammatical constitution and a cosmic invocation, have also been acknowledged for their therapeutic properties. Creating experiences that are fashionable, relevant to the current sociocultural milieu and valuable for individual wellbeing can spur the revival of India’s cultural and creative economy as a source of prosperity and growth. The increasing pace of digitization and technological advancement further enables Indic knowledge to be presented through more creative means to a wider set of audiences. While cinema has been the typical digital platform for sharing stories, newer avenues include ideational exchange over social media, online concerts and exhibitions, and even cultural experiences through virtual reality. The spectrum of creativity is infinite and the depth of Indian culture is unfathomable. The amalgamation of culture, creativity and entrepreneurial acumen can open a plethora of opportunities.

The Network of Indian Cultural Enterprises (NICE), associated with the Center for Soft Power, is such an initiative aimed at nurturing cultural and creative entrepreneurship and harnessing the economic potential of Indian culture. It seeks to augment the presence of Indian cultural enterprises–across global markets–that are cognizant of consumer choices; enabled by technology-driven innovations; and deeply rooted in India’s heritage and indigenous thought. The Indian diaspora community, the largest in the world and regarded for their high ethical values and enterprising nature, can also play an instrumental role in bolstering the global demand for Indian cultural products and services. As consumers as well as distributors of Indian culture, members of the Indian diaspora can contribute to strengthening India’s knowledge economy, including its arts, in their homeland and their host lands. Building a robust transnational network of cultural experts and enthusiasts, entrepreneurs and consumers is an essential step towards enhancing India’s cultural footprint. Indian cultural traditions, underpinned by civilizational wisdom are an invaluable gift to the entire humankind, and when leveraged economically to the maximum potential, it can pave the way for India to emerge as a world leader in the creative economy.

This story originally published in SoftPowerMag and subsequently in Swarajya.